An interesting aspect of abnormal psychology is how common some of these abnormalities actually are.

By definition, abnormal means deviating from the norm. And while this is true, it’s also true that tens of millions of people exhibit abnormal behaviors each and every day. And of those people whose behavior can be classified as abnormal, many of them have an identifiable mental disorder.

So this begs the question, what are some examples of abnormal psychology?

This field of psychology is the study of mental and emotional disorders that interfere with a person’s ability to carry out typical daily activities. We can consider these disorders – be they mental, emotional, or behavioral in nature – to be things that negatively impact a person’s life experience. As a result, the life experience of those around them can also be significantly affected.

Psychologists study the symptoms of these disorders as well as their causes. Likewise, abnormal psychologists strive to develop treatments for mental and behavioral disorders that fall under the realm of “abnormal.” These treatments can range from medication to therapy and many points in between.

Abnormalities arise for any number of reasons. A person might have experienced trauma as a child or in war. There might be a genetic component to the development of a mental disorder. Some abnormal behaviors arise as a result of chemical imbalances in the brain as well.

Whatever the cause of the impairment, the Diagnostic and Statistical Manual of Mental Disorders, Fifth Edition (DSM-V) outlines three broad criteria for describing abnormal behavior or psychological disorders. They include:

Many psychologists add danger to the list as well, even though it is not identified as a criterion in the DSM-V.

It is important to note that having a mental disorder does not make a person dangerous. Many people with a mental disorder pose no danger to themselves or anyone else. But, in rare cases, individuals can pose a threat.

Now that we understand the basic underpinnings of what makes something abnormal, we can look at some examples of abnormal psychology.

A major depressive episode is often described as the common cold of mental disorders. It is extremely common and people can experience it many times over the course of their lives.

Depressed individuals experience any number of common symptoms, including feelings of sadness, loss of interest in activities, digestive issues, chronic pain, and feelings of hopelessness. Fatigue, loss of appetite, excessive guilt, and indecisiveness are additional symptoms.

For diagnostic purposes, a person must experience five or more of these symptoms for a period of at least two weeks. Additionally, one of those symptoms must be either a depressed mood or loss of interest in activities.

There are other types of depression as well. For example, persistent depressive disorder occurs when a person is depressed for two years or longer. This type of depression shares many of the same symptoms as major depression, but those symptoms are less severe but longer-lasting. 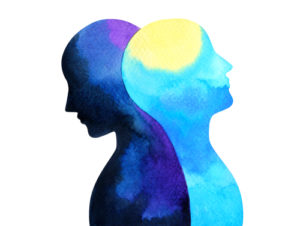 Bipolar disorder used to be categorized as a type of depressive disorder, but in the DSM-V, it is categorized separately.

As you can imagine, bipolar disorders are highly challenging because of the changes in mood.

Like depression, anxiety disorders are also quite common in the general population. These disorders go beyond feeling anxious, though. Instead, someone with an anxiety disorder experiences extreme feelings of worry and anxiety. There are high levels of fear as well.

There are many different types of anxiety disorders:

This disorder involves a cycle of obsessive thoughts that are followed by a compulsive action. The obsessions cause great worry, and that worry is relieved through compulsive behaviors. For example, a person with OCD might obsess about the cleanliness of their hands to the point of compulsively washing them dozens of times a day. Other common examples of OCD include:

These behaviors must be time-consuming or cause clinically significant distress or impairment in a person’s functioning. So, a person that double-checks the door to make sure it’s locked would not be diagnosed with OCD. However, a person that spends an hour each morning repetitively checking to make sure the door is locked might be diagnosed with OCD. 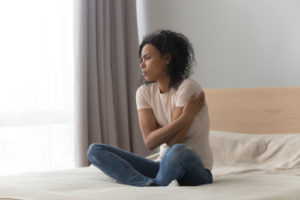 The most commonly known disorder in this category is post-traumatic stress disorder, or PTSD.

PTSD is characterized by a wide range of symptoms that arise from experiencing a traumatic event, either firsthand or one that was witnessed. These symptoms might include:

People with PTSD are often prone to anger, aggression, and self-destructive behavior, as well as a host of other severe symptoms.

To dissociate is to separate from one’s self and surroundings. It might include interruptions in one’s memory, identity, or both.

There are many different kinds of dissociative disorders:

Schizophrenia Spectrum and Other Psychotic Disorders

Schizophrenia is a disorder marked by frequent and severe disruptions in daily mental and physical functioning.

To be diagnosed with schizophrenia, at least two of the symptoms listed above must be present for a period of at least six months. Furthermore, one of the symptoms must be hallucinations, delusions, or disorganized speech.

Finally, personality disorders encompass various ways of behaving, thinking, and feeling that is a deviation from expectations of normal behavior. They are conditions that last for a long period of time and can cause significant distress and difficulty in daily functioning.

There are 10 different types of personality disorders:

Though personality disorders can be quite serious, they can also be less intrusive to everyday functioning than some of the other types of abnormal psychology on this list. They interfere mostly with a person’s ability to form and maintain healthy interpersonal relationships as opposed to significantly inhibiting their ability to function.

These disorders can all be scary and unpleasant for those suffering the symptoms, as well as people close to them. Fortunately, all can be manageable with a commitment to seeking treatment. Some people can recover on their own after a brief period of treatment. Others require ongoing and consistent treatment. However, it is possible for most people to live healthy and productive lives with a mental disorder.