10 Worst Reasons to Stay in a Relationship, According to Science 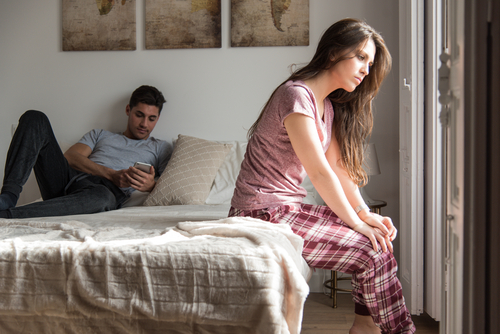 As social creatures, relationships are some of the most important aspects of our lives. Both biology and society tell us that we are meant to enter into a loving relationship, make it legal, and then perhaps add children to it. But what happens when things don’t go as planned, and relationships don’t look like they do in our favorite romantic movies? According to plenty of scientific studies (not to mention the countless real-life scenarios relationship therapists are faced with each and every day), we come up with excuses and reasons to stay in those imperfect, often unsatisfying relationships. Below, we’ve listed 10 of the worst (yet most common) reasons people find to stay in a relationship.

We Tend to Believe We’re in the Relationship We Deserve

Conducted decades apart (1986, 2008, and 2017), at least three psychological studies have found correlations between low self-esteem and unsatisfactory relationships. The studies found that while most people attest to having “standards,” those standards directly mirror how they view themselves. For example, a person with low self esteem goes into a relationship expecting to face a number of challenges (an attitude that is almost certain to cause issue). When those expectations become reality, this person believes that their expectations are being met and that they’re unlikely to end up in a better situation.

According to the 2017 study, this outlook is especially common among those who experienced abuse in their formative years.  This causes a further decline in self-esteem.

The Alternative is Less Than Ideal

A 1986 study which looked at the psychology of different group dynamics found that our perception of various alternatives colored the perception of our current situation. It’s not uncommon for people in unsatisfying relationships to look past the elements that make them unhappy because they view loneliness, childlessness, independence, and/or the single life as worse.

A 2011 study found that this is especially true in societies where women do not easily achieve economic independence.

We’ve Invested Too Much

Studies done from 1965 to 2016 reveal that a couple’s shared investments often act as reason enough to stay in an unhappy relationship. These investments often include a home, children, and business, as well as time and effort. A 2015 study found that unhappy couples are more likely to stay together if they feel they have invested too much time and/or money into a shared life. Another 2016 study took this idea further. It found that when people feel they’ve invested too much in a relationship, their views become so biased they rely on emotions rather than rationality to make decisions about the relationship.

An Unwillingness to Hurt the Other Person

There’s a prominent yet false belief that every breakup has to have a “bad guy.” This  idea has caused countless people to remain in unsatisfying relationships because their partner hasn’t done anything wrong. Few people realize that by remaining in a dishonest relationship, one is doing more to harm the other than they would if they were honest and ended things.

We Don’t Know How to be Emotionally Independent

Today’s society is one of community and instant gratification. If we’re feeling down, we can simply vent our frustrations on social media and receive dozens of well wishes and encouraging words. Though convenient for the inevitable downer of a day, the reality is that this has kept many people from developing emotional independence. They don’t know how to separate their happiness or unhappiness from that of another person.

So whether a relationship is toxic or not, many people stay in unsatisfying relationships because they falsely believe that relationship or other person defines their emotions. This often leads to the prevalent “I can’t live without you” belief.

Together for the Kids

The well-being of a couple’s children is a valid concern. But it can also be misguided as sometimes it’s unclear whether or not children are better off with parents who are divorced, or parents who remain together but are very unhappy.

According to Psychology Today, when children are exposed to parents who are routinely at odds (both verbally and physically), it’s common for those children to grow up affected.

Also, conflict-free, but emotionally void marriages are not an ideal environment either. It’s also worth noting that unhappy couples often resort to the socially accepted excuse that they’re “staying together for the children” when in fact, they’re staying together because of their own needs and fears.

This an especially common one. Both men and women often choose to stay in an unsatisfying relationship because they delude themselves into thinking that things  may improve. I can make him change or She’ll realize I’m right eventually. It’s true that many things can get better with time. There are some things that are unlikely to improve — especially if that improvement comes at the cost of one partner changing who they are. Often, by the time one or both partners realize that things cannot get better, they have mutual investments, children, years of time in the relationship, or other things that make it difficult to walk away.

After publicizing a relationship on social media, after family members come to love one’s partner, or even just after years of togetherness, ending a relationship can often seem embarrassing. “Relationship failure,” according to Psychology Today, is a real sense of shame that some people find completely unacceptable. These people find it easier, and sometimes even preferable, to remain unhappy in an unsatisfying relationship.

There is No Such Thing as a Successful Relationship

The belief that every relationship is simply “misery management” is surprisingly common. This is according to relationship therapist Richard B. Joelson in a Psychology Today article. Oftentimes, this belief stems from growing up with parents in an unhappy relationship, while in other instances, this belief comes from those who tend to avoid confrontation at all cost. Believing that no relationship is successful often leads to settling into a partnership that is anything but. Separate lives are often led, even when living in a small space, because the brain has been trained to believe that true happiness in any relationship is not possible.